I’ve recently had a chance to go back to Travesía.  I’m not going to lie; it was a strange feeling to roll back into town after being gone for a few months.  So many things seemed up in the air when I left that I honestly wasn’t sure when I’d be coming back.

In some ways it seemed like I had never left, but in other ways I could tell I had been gone a little while!  One gigantic way I could tell we had been gone for a while was at the academy and on the property.  When I left we had a little grass, but it was still in it’s fledgling stage and just taking root.  And we had planted several different types of trees around the property that were just little saplings.  But now, on the majority of the property, there were grass and weeds at least knee high!

It was a stark contrast from the beginning of June!  Of the trees that we had planted, a few had died but most were still alive.  And not only were they alive, they were thriving!  This was the opposite of what I anticipated.  I had mentally prepared myself to see a dry, dusty property with dead saplings scattered around.  But I was completely wrong in my expectations!  There is abundant life there that isn’t just scraping by, but is flourishing.  And it is flourishing in the midst of trials, change and absence.

God reminded me of His grace, faithfulness and provision through the grass and the trees that are growing strong right now at the Academia Deportiva de Travesía!  There’s no one there to water the grass or fertilize the trees, but they are stronger than ever.  During the past two months, it has started to rain at night.  When I transitioned from Honduras to Guatemala at the beginning of June, Honduras was in the midst of a dry, hot season with no rain at all.  But since then, it has been raining consistently at least a few nights every week. God has been sustaining and providing exactly what is needed.  And what’s more He has given immeasurably more than was needed.

Paul speaks about God’s power in a similar way in Ephesians 3:20-21 “…to him who is able to do immeasurably more than all we ask or imagine, according to his power that is at work within us, to him be glory in the church and in Christ Jesus throughout all generations, for ever and ever! Amen.”  God is working in this same manner now in Travesía and has plans for the future here.  He is not done with this community and has reminded me of that yet again with something as simple as the grass and the trees!  He is doing far more than we could ask or imagine.

It’s as if He wants to remind me that He is in Travesía no matter if I am there or not.  He is providing for this community and by His grace he will never leave or forget these people.  He is reminding me personally that He is deeply in love with the people of Travesía.  He will be the one who changes their lives and draws them to Him with he’s constant love and unending patience, grace and mercy.

With this reminder, I immediately think of 1 Corinthians 3:5-9.  Paul is reminding the church that no matter who the teacher or leader is, it’s ultimately God who is the catalyst for growth: “What, after all, is Apollos? And what is Paul? Only servants, through whom you came to believe—as the Lord has assigned to each his task.   I planted the seed, Apollos watered it, but God has been making it grow.   So neither the one who plants nor the one who waters is anything, but only God, who makes things grow.  The one who plants and the one who waters have one purpose, and they will each be rewarded according to their own labor.  For we are co-workers in God’s service; you are God’s field, God’s building.” 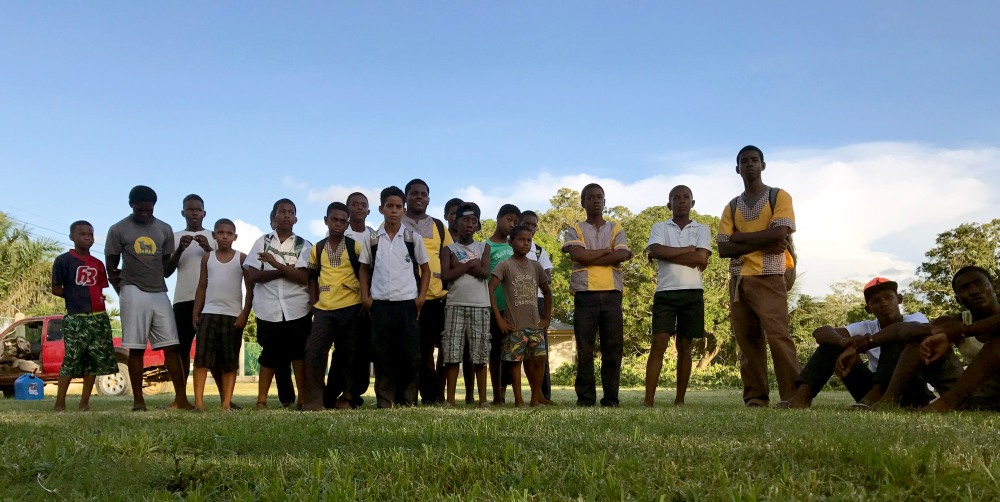 God wants others to join Him in this high endeavor, but it’s His plan and his power that is at work, not mine and not yours.  And I don’t know about you, but I want to be a coworker with Him in this kind of planting!  It’s something that will last and will stand against any storm and will endure long after I am gone.  I can already see how it has figuratively and literally taken root in Travesía.

God has a plan and is not taken by surprise or caught off guard by events that might seem to throw a wrench into these plans.  In His creativity, grace and mercy, He can actually use these things that may seem evil for His good.  He by no means wants these things to happen, but when they do, it doesn’t mean things are finished and that we should pack up and leave.  It might seem like a mountain but it’s really just an anthill to God… or in this case, it might seem like an overgrown jungle, but it’s really just some high grass that needs to be trimmed.